Disagreeing whilst all being incorrect

In tabular form below is a summary of statements made by Government, Opposition and bureaucratic officials about the 2017 National Budget and the veracity of those statements. Most troublesome and regrettable is that all these reported statements are incorrect in varying degrees. 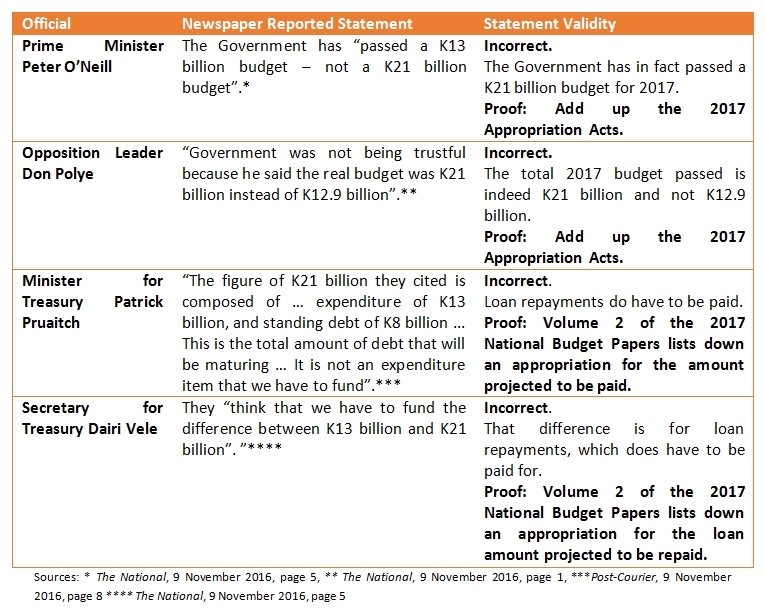 Our Constitution and other legislation sets out the legal requirements for public funds raising and spending. There are also legislation and accounting standards that govern how public funds are compiled and accounted for – the Government has just adopted a new fiscal accounting standard. Both are distinct concepts but the latter can be easily accommodated with our country’s legal requirements.

The new international fiscal accounting standard is explained in Volume 1 of the 2016 and 2017 National Budget Papers. The purpose of the new standard is to compile statistics that correspond to other economic accounts and allows for economic analysis. It broadens the coverage of fiscal accounts beyond the national government to include subnational government, public enterprises and other public bodies. It also forces the gradual transition to accrual based accounting from the current cash basis used by Government. Accrual recording takes place when ownership transfer takes place or when services are provided rather than when cash payment takes place.

Apart from complying with the international fiscal accounting standard, the Government most importantly still needs to comply with its own financial accounting frameworks and legal requirements, which it hasn’t done with the 2016 National Budget with respect to debt repayments.

I also note that my analysis on the omission of the 2016 debt repayment appropriation has been misinterpreted and applied incorrectly to the receipts side of the national budget but some of the thinking underpinning that misapplication has merit and is worth exploring.

In my posting on the omission of appropriation for debt repayments I was careful to distinguish between expenditure and payments. Payments is an all-encompassing term that includes expenses such as wage bill, goods and services, consumption of fixed capital, interest, subsidies, grants, and outlays relating to the acquisition of financial and non-financial assets as well as the settlement of loan principal repayments.

So a payment is any charge that may be laid against Consolidated Revenue Fund (“CRF’) within a budget year. The CRF is defined as the public account that collects nearly all public moneys including cash receipts of the Government. There is a hierarchy of authorizations before any public funds leaves CRF:

When discussing the size of the budget it is usually the level of expenditure that is quoted so to allow clarity it is best called the expenditure budget. There is also a revenue budget. But ultimately total payments should match total receipts – these details can be found in the Volume 2 set of budget documents to verify this. I won’t dwell on the receipts side of the budget now.

Once again I ask: “Who is accountable for this breach?”